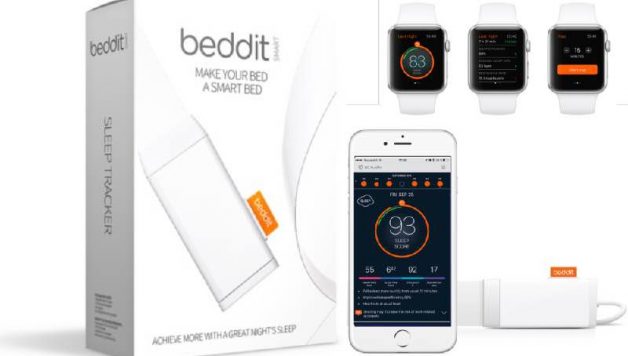 Apple Wants You to Sleep Better with Beddit No ratings yet.

Apple has immersed itself into almost every tangible facet of our lives. The iPhone is one of the most popular smart phones/electronic devices of all time, and they continue to bring us world-class computers, as well as a whole range of other products.

But, Apple has never really had a sleeping device or system to go with it… until now.

What Has Apple Got To Do with The Quality of Your Sleep?

According to this article, published on www.thesun.co.uk, Apple has acquired a company called Beddit. Beddit is a company that devoted itself to helping their customers track snoring and disrupted sleep—and it seems to be the first step in a bid by Apple to get into the sleeping market.

Sleep is a big deal nowadays. We live in a world where everyone is trying to do as much as they can throughout the day. But the result is that they often suffer when the time comes to sleep. Most people don’t have much time for sleeping, to be honest. And when they do, problems like snoring can do a lot to keep them awake.

But it is possible that Apple is going to use the Beddit technology to either improve their existing products, or even create their own—and we are honestly pretty excited about it.

What Did Beddit Actually Do?

Apple has made no plans (that we know of) to release any products using the Beddit brand… but we were very familiar with what Beddit was before it was acquired by Apple. It showed some promise, and seemed to be a good idea—but in all honestly, the customer reviews for it weren’t so great.

Beddit claimed to help with sleep by using a monitor to sense things like snoring and movement. It strapped to the top of the mattress, and took readings. It even measured the temperature. Beddit technically worked with the iPhone already, but it was plagued with problems. And it seems as though its ability to connect to the iPhone 7 suffered most of all… making it problematic for Apple users to make use of anyway.

The device uses a scientific principle called ballistocardiography, or BCG. It measures activity from the heart, lungs, and other parts of the body using non-invasive technology. It collects data while you sleep, and then uses algorithms to, basically, determine what is going on while you’re snoozing… which would, in theory, help you to track the quality of your sleep and aid you in making positive changes.

But thus far, Beddit has been a bit of a let-down—which is why we are excited at the idea of Apple taking the technology and making it into something that the rest of us will be able to use… preferably, along with our Apple devices.

How Could This Technology Really Help?

Sometimes, snoring isn’t such a cut-and-dry problem to deal with. There are a lot of remedies out there that are supposed to be able to help, but the truth is that none of them are 100% guaranteed to work for everyone.

That means that you will have to use trial-and-error to figure out which products will do the most for you.

And a sleep monitoring device, much like those created by Beddit, can be an awesome way to gauge exactly how well you are sleeping (as long as they are working well and are reliable, that is). It is admittedly difficult to tell how bad your snoring problem is when you are trying to sleep… especially if you live alone or do not share a sleeping space with a partner.

Devices like this can help to make up the difference by giving you important data that you can use to determine how well a particular method is working—which can help you along the path to treating your snoring problems in less time and with fewer setbacks.

Joshua Sigafus is just a writer trying to make the world a better place. He writes extensively about positive living, health, wellness, success, and happiness, and you can check out his daily blog at www.livinginspringfield.net for daily positive vibes and blog posts.