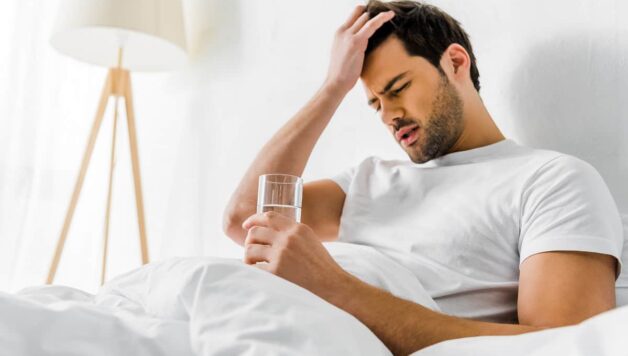 Is Snoring Giving You a Headache? No ratings yet.

Published On December 28, 2020 | By SDA Editorial Staff | About Snoring

Snoring isn’t just a pain for the people around who are also trying to sleep. Research has found that one of the causes of chronic headaches experienced throughout the day could be related to those who snore. What isn’t very clear is what causes what. It could be the snoring causes the headaches, or the headaches lead to additional snoring.

We are here to help paint a clearer picture and perhaps shed some light on this relatively common problem that many seem to experience at least once in their lives. So, does snoring give you a headache? Here we will take a look at the risk factors and the scientific reasons that snoring may be giving you a headache.

The Scientific Links Between Snoring and Headaches

A National Institute on Aging study found many years ago that people who suffer from daily chronic headaches are twice as likely to be chronic snorers, at least compared to people who suffer from the occasional headache. Risk factors played a large role in these findings, too, as it made the difference between the two groups more significant and therefore noticeable.

Headaches have forever been a common problem for those with sleep apnea; this we’ve known for some time. However, when the research was being conducted on those without sleep apnea, it is more likely that snoring was more of a warning system.

Those without sleep apnea who had begun snoring were almost as likely to experience a headache throughout the day as those who had sleep apnea. So it is more likely that snoring is a significant predictor for chronic head pains.

Knowing the number of people included in this study and the differences between the two groups, it was reported that 24% of chronic sufferers were habitual snorers, compared to 14% of the occasional headache sufferers from the occasional category.

After the experts made some adjustments to their calculations to include characteristics such as alcohol use and obesity, the conclusion came to be that daily chronic headache sufferers were almost three times as likely to snore on a nightly basis than others.

The Effects of Sleep Apnea

Now that we know that there is a link between these chronic headaches and sleep apnea, let’s look at one potential cause or effect. Let’s first begin by explaining two different types of sleep apnea that can occur in people so that we can deconstruct any stigmas associated with the disorder.

The more common type of sleep apnea is obstructive sleep apnea, when the soft tissue in the back of the throat relaxes too much and can collapse to block the airways, closing the windpipe. The other type is central sleep apnea, which results in the airways not being blocked, but the brain failing to signal the muscles to continue breathing in your sleep.

Because breathing is obstructed and often just stops for a second or so, not enough oxygen is circulated around the body, leading to a building up of carbon dioxide in the blood. Now, this on its own sounds quite scary, as we all know that a lack of breath can lead to lightheadedness in more harmless cases.

However, sleep apnea leads to nightly problems with circulation, which is why blood pressure often becomes a problem for sufferers. This repeated lack of oxygen and excess of carbon dioxide will begin to affect the nervous system and blood flow to the brain, which can be one of the major causes of these chronic headaches.

Jeanetta Rains, Ph.D., and director of the Center for Sleep Evaluation at Elliot Hospital in Manchester, N.H., also did a similar study of her own. After analyzing 800 patients, 35% of those questioned reported they suffered from morning headaches, and 19% of those who had morning headaches had them occur daily or nearly daily. Of that 19% who complained of frequent or daily headaches, 67% had sleep apnea.

The study’s conclusion revealed that 81% of those who snored and had morning headaches had sleep apnea.

Is Snoring Giving You a Headache?

Well, based on the previous two studies that have linked headaches to improper sleeping habits and sleeping disorders, we can safely say that your snoring can be linked to your headaches. While it may not be your snoring that is exactly giving you your headaches, both the snoring and headaches are related to the same thing – poor sleep and sleeping disorders. Think of these two as symptoms of a larger problem. They are examples of your body trying to warn you that there is a problem occurring when you sleep.

The bottom line is that people have a misconception that their headaches cause irregular sleep when, in fact, it is the other way around. Should you suffer from chronic headaches, especially morning headaches, speak to your doctor or physician about the possibility of a sleeping disorder.

This could most commonly be sleep apnea, but you could suffer from another issue that could be having a similar effect. For example, smoking, alcohol consumption, and sleeping tablets have all been known to cause obstructive sleep apnea, which could be the reason you are suffering from those chronic morning headaches.

Finally, we would like to remind you that while snoring caused by sleep apnea could cause your chronic headaches, keep in mind there are hundreds of other potential causes for headaches of all kinds. It is rarer than not for people to resolve their headache problems, especially when it comes to chronic problems.

We hope we have shed some light on what is often a confusing and irritating problem.